Dave Kaminski – The Art Of Being Prolific

Does This Sound Like You?
You’ve Purchased Dozens of Marketing Courses,
All The Must-Have Software and
Even Have a Great Idea For a Website…
But You Still Haven’t Done Anything!

Here’s The Good News:
I Can Fix That For You

I feel your pain. A head full of ideas and good intentions…but little to no action on any of it. Ever.

Actually, I know this pain a lot more than you might think. That’s because for the better part of my life people called me a dreamer, unfocused and my personal favorite, a loser. And this “encouragement” wasn’t coming from strangers, but from family and friends.

People called me these things because I was a world-class procrastinator. I always had big plans, but never followed through. I had stacks of to-do lists that were left untouched. I had partially built websites that I ignored until the domains expired. And I had loads of ideas that never went any further than my head (until someone else would make a killing with the same idea and I’d kick myself – for example, betcha didn’t know that roller blades were my idea).

And I Do It All Alone
No Virtual Assistants, No Hired Help, Just Me

It’s because over the years I developed a system for being prolific. That means I came up with techniques for getting a huge number of things done every day, but without getting stressed-out, burned-out or overwhelmed by it all. And while still being able to have a personal life, where I can pretty much do whatever I want, whenever I want.

Yea, I know this sounds hard to believe. But stick with me here and you’ll see that I’m able to do this because my techniques are very counter-intuitive. They are not what you’re “supposed to do”. In fact, I do things pretty much the exact opposite of how everyone else says you should. For example, with my system for being prolific there’s…

No Goal Setting, No Relying on Willpower,
No Productivity Apps, No Spreadsheets and
No “Woo-Woo” Self-Help Stuff

Basically all of the stuff that’s supposed to make you more productive and less stressed, well, I don’t do it. And that’s because it doesn’t work. At least for approximately 98% of people, myself included (that’s a real statistic).

Goal setting, productivity apps, project planning software, mind-mapping software, spreadsheets and more. All of those things actually slow your progress, cause more stress and simply turn into yet another annoying thing you need to manage…on top of everything else. It’s a lot like someone trying to travel across a foreign country, but they spend more time fiddling with their map (or GPS set to a foreign language) than actually driving.

And the self-help stuff like power hours, power thinking, mantras, manifesting and everything else that’s purported to unleash your true potential are even worse. I know because I used to write sales pitches for that industry. Those products sell like crazy, but they don’t work. The people selling them know they don’t work. And they don’t care. They’re just setting you up to buy their next product, which won’t work either.

If you think about it for a moment, it’s very ironic. Never before in the history of the world have there been more apps, software, tools and methods for making you more productive. Yet, you’ve never been more overwhelmed by tasks and frustrated at your inability to get any of them done.

For example, I know that willpower and motivation are not sustainable
They’ll maybe last a week and then you’ll go back to your old ways of doing things. So I figured out a way where I didn’t need either of these. A method to get things done that is sustainable, where I can keep doing it every day without becoming drained, bored or hitting a plateau.

I also know that unexpected and uncontrollable things happen all of the time
Or as the boxer Mike Tyson said “everyone has a plan until they get punched in the mouth”. And when you do get “punched”, up goes the stress, out goes the focus and your project is looking at almost certain death. So I came up with ways to gracefully handle these fiasco’s, where I don’t get stressed-out, everything gets fixed and the project keeps moving forward. And probably even more important, where none of my other projects are impacted whatsoever.

I know that figuring out the first step of any project can be absolutely maddening
You end up feeling paralyzed by indecision, in a weird kind of way. “What should I do first…this, that or the other thing?” you mutter over and over. Which keeps you firmly frozen in your tracks. So I developed a trick that puts an end to this dreaded indecision, pretty much on the spot.

I know that finding time to do something (or worrying about how you’ll find time) makes you feel like you’re in no man’s land
It creates pressure. This pressure leads to stress. And that stress leads you into just about everything but actually creating the time you need. So I figured out how to “hack” time, so to speak. It’s really a method that allows me to work on multiple projects each day (sometimes over 10), without it ever seeming like actual work. It’s probably the best (or luckiest) technique I’ve managed to create.

I know the “shiny penny syndrome” will cause you to abandon everything so you can chase that sexy, new rabbit down a hole
And because that chase is so intoxicating, you then spend most of your time chasing after more and more of these rabbits…and none of your time accomplishing anything that matters. I’ve done this so many times it’s embarrassing. But it’s really not a problem for me anymore, because I use a little trick that sends these rabbits scurrying right past me.

And I know all about the disappointment you feel when a project that should have taken you a week to finish is still sitting untouched after a year
Hey, your intentions were good, but things came up that had a higher-priority. At least that’s what you tell yourself. Next thing you know it’s a year later, a lot has changed on the Internet and there’s a slew of new competitors for your idea. I used to be that guy too. But now I use simple, stress-free and “proven-a-hundred-times-over” techniques for getting things done way faster than anyone else. In other words, I use techniques that make you prolific.

Again, I get it…that might sound hard to believe. But I say that because for the longest time, I was just trying to come up with ways to get things done so I could silence the critics in my life.

I wasn’t even aware that I was doing anything special. I was just doing what I do. It was simple, pretty much hassle-free and I was getting a lot of work done. No big deal, I thought.

But then people started asking me how in the heck I was so prolific. I was getting emails saying “I’d like to chat with you about your prolific product creation, which is impressive” and “I would like to discuss how you organize yourself so that you essentially kick ass each and every time. Product after product. Great copy after great copy”.

I was kind of taken aback at first and remember thinking “what are these people talking about?”. I didn’t realize how my extreme productivity looked to the outside world. But then it dawned on me that I had completely forgotten what it was like to be a world-class procrastinator – I had escaped that prison. But everyone else was still in it. And they needed help. Like bad.

As a result of that epiphany (and because sooooo many people ask me about it), I’ve decided to share my system on how to be prolific. In the past, I’ve talked about a few small things I do, but I’ve never done a tell-all, this is everything I do from A-Z breakdown of my methods and techniques. I’ve never created a complete, step-by-step system that you can duplicate yourself. I’ve never created a course telling you how to do, what I do. But now I have and I’d like to share it with you.

Introducing…
The Art of Being Prolific

This is the course that shows you how to accomplish more in 30 days than most people do all year. Yea, I know that sounds a bit cheesy, but I can say it because it’s what I do. And once you know how to do what I do, there’s no valid reason why you can’t do the same.

The course contains 100% video training and in each video lesson I’ll walk you through the techniques I personally use to end procrastination, ignore distractions, calmly juggle multiple projects and get one thing done after another. All by myself.

On top of that, I’m also going to walk you through real-world situations on how to apply these techniques. For you, that means you’ll be crystal-clear on how my system works and you won’t have any confusion as to whether you’re doing something wrong or right.

And oh yea, you get unlimited, lifetime access to The Art of Being Prolific. That means you can watch the video lessons as much as you want, anywhere and anytime you want and from any device you want.

The Art of Being Prolific Is All About
Action, Action
and Then More Action

The Art of Being Prolific is about taking action. Because that’s all that matters. It’s the only way you will get things done.

You can think about what you’re going to do day and night. Hey, I get it. It’s fun (like really fun) to daydream about where your ideas might take you…and where you might be in a month or 5 years from now. But that’s still just a fantasy and only action will get you there.

You can talk about what you’re going to do until you’re blue in the face, brainstorm endlessly with friends and colleagues or announce to anyone and everyone who’ll listen what your big plans are. Yep, it’s exciting to make others envious of where your big plans will take you. But talking about something doesn’t make it happen. Only action does.

Or you can go the sophisticated route of meticulously planning out every mundane step of your project. Hey, I’ve been there…it makes you feel professional, smart, important and oh-so organized. And sure, you might be closer to actually doing something, but you’re still firmly stuck at the starting gate. Only action will move you forward.

I’m going to show you how to take that action. How to move past thinking, talking and planning and for once in your life (or for the first time in a long time) actually get things done. And not get things done just once, but over and over and over again. To become prolific. And all without stress, searching for time or toughing it out through willpower.

I’ve already served my time in that prison. It sucked. I had to dig my way out. No one was there to help.

You’re lucky. You have the opportunity to have someone who has been where you are, show you how to get to where you want to be.

I’m going to teach you how to take action, regardless of your circumstances (or your excuses). And then how to continually duplicate those actions into becoming prolific. You don’t need another marketing product. You need a course on how to get sh*t done. And this is it. 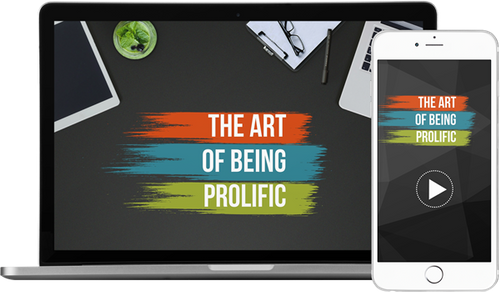 Dave Kaminski – The Art Of Being Prolific Contains: Videos, PDF’s

Vote for Next Group Buys ! HERE